This is the second in a series of posts I began this summer and didn’t have time to finish.

Edit 2011/01/17: I finally noticed and fixed a small glitch in the raw command line I was using, probably caused by my use of “<>” in the example text. Sorry, folks.

We all know how it feels, right? You’ve been coding away happily, decide it’s time to push everything to your version control system of choice, type out a brilliant commit message, and hit Enter–only to find out five seconds later that you just committed something you shouldn’t have committed and everyone else is in trouble when they happen to update. What do you do now?

Well, if you have a decent version control system (VCS) such as Mercurial or Git, you take advantage of the built-in undo or undo-like command and simply undo your commit. Most modern distributed VCS’s have one, giving you at least one chance to fix your work before you hand it out for everyone else to use. However, some less-than-fun VCS’s make it difficult (mostly because they’re designed to keep the information you give them forever, warts and all, which is not a bad thing). However, it’s still usually possible to fake an undo.

Take Subversion, for example. It’s not my favorite VCS for reasons I may go into later, but it’s still a very solid one if you like and/or need the centralized type of thing. I used it a lot this summer while doing an internship with Sentry Data Systems, and I found myself needing to rollback a commit on some files a time or two. So, I did some research.

Arguably the best way to rollback a commit in Subversion is to perform what they call a reverse-merge. In a normal merge, you take two versions of a file, compare them to figure out what’s different between them, and then create a new file containing the consensus content of both files (see picture to the right). 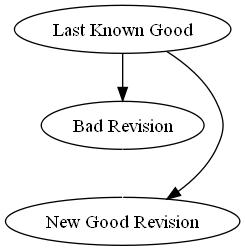 In a reverse-merge, you figure out what changes were made in a given revision, and then commit a new revision that reverts all of those changes back to the version before you committed your bad revision (see picture to the right), which means your bad revision will be simply skipped over as far as your comrades are concerned. Subversion provides a simple series of commands for this:

Here’s how it works.

That’s pretty much it. Once you run that command (assuming there are no conflicts in your merge), you will be able to simply commit (with a helpful commit message, of course) and everything will be back to normal–your comrades in arms will be able to keep working without the overhead of your bad commit cluttering up their working environment, which is always a good thing.

This is the first in a series of posts I began this summer and only now have time to finish.

Every once in a while, I find myself needing to copy a large number of files from one Linux machine to another, ideally as fast as possible.  There are a lot of ways to do this, but the most common method usually goes something like this:

This is all well and good, and it tends to work well in most cases–it’s just kind of laborious.  I prefer a simpler method that basically wraps everything up into a single step, affectionately known as a tar pipe.  The (admittedly somewhat complex) command follows.

The variables are just to make things a little more easy to read (feel free to ignore them if you like), and I do recommend using a full path for the DESTDIR directory, but the basic process is ridiculously easy.  Here’s the breakdown on how the whole thing works.

What it untars is a bit of a mystery, as we don’t really tell it what it’s supposed to work on.  Or do we?  As it turns out, ssh passes whatever it receives on stdin on to the command it runs on the server.  I.e., all that stuff we just tar’red up gets passed along through the magic of piping from the local machine to the remote machine, then extracted on the fly once it gets to that machine.

You can see the benefit of this, I trust–instead of that whole four command process we detailed above, including manually logging into the remote server to actually extract the new file, we have one fairly simple command that handles taring, uploading, and extracting for us, with the added benefit of not requiring us to actually create any files we don’t have to create.  That’s kind of cool, right?

Note:  I’ve seen other implementations of the tar pipe, but this is the one I’ve used been using recently.  It’s worked for me on Red Hat 5, but your mileage may vary.